Have you ever noticed strange behaviour from your neighbourhood squirrels or raccoons? Perhaps they were staggering through the street or seemed overly aggressive. It’s common for diseases and viruses to spread through small mammal populations, even in urban centers like Toronto. Squirrels, raccoons, foxes, bats, and skunks can all carry various diseases. Although many can’t spread to humans, they can infect your pets.

What are the common diseases in urban wildlife? What are the symptoms, causes, and outcomes of these diseases? Here are the most common wildlife diseases and how you can keep your family and pets safe.

Raccoons have become an iconic mascot for Toronto. Some of us love them; others detest them. Regardless of your opinion on these furry bandits, you can’t argue with their ability to spread disease. Raccoon roundworm, or Baylisascaris procyonis, is a parasite that lives in their intestines. It causes no problems for the raccoon, but when spread to other animals or humans can have severely harmful effects. 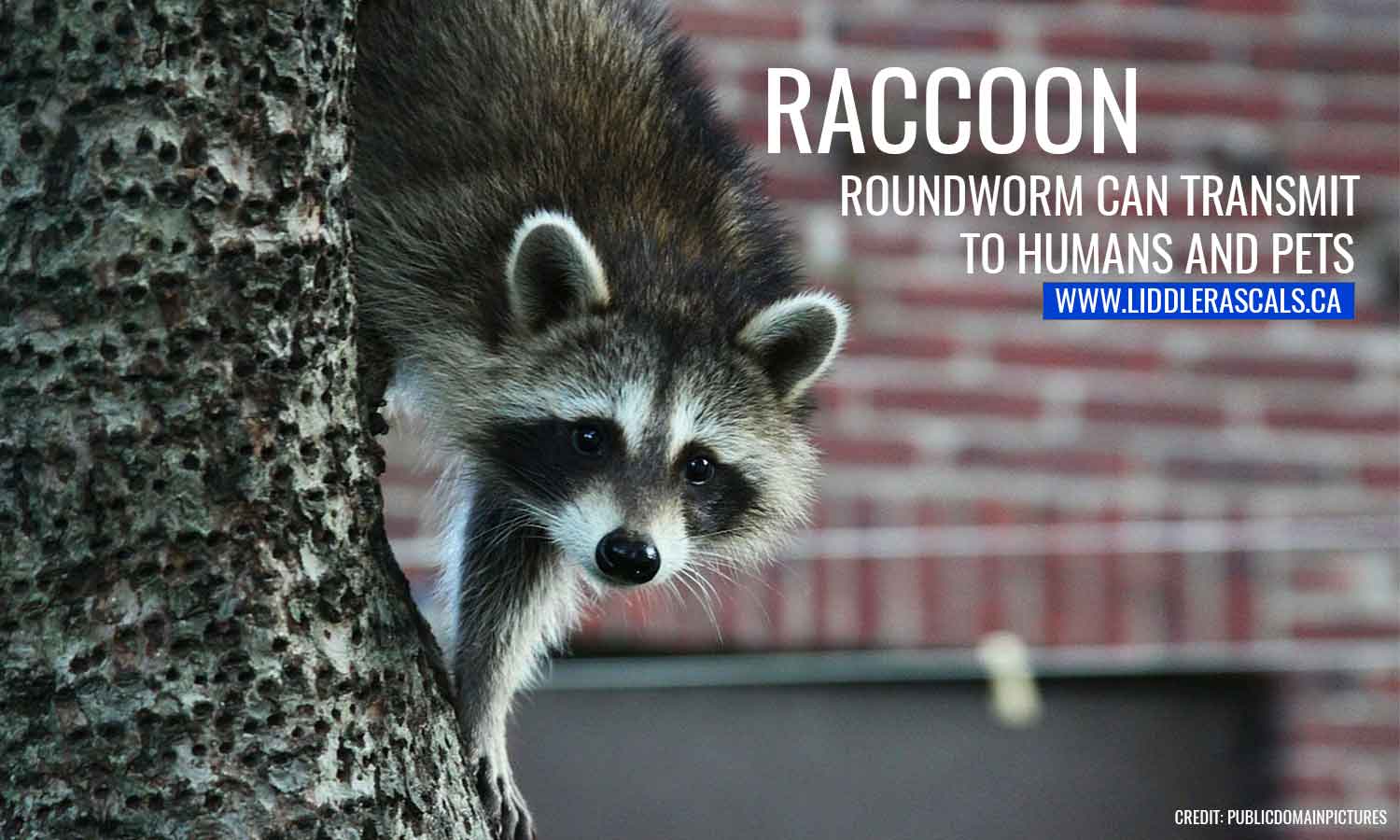 Raccoons excrete the roundworm eggs, which then grow into larvae. Dogs, cats, and other animals ingest the larvae by eating the feces or digging through it. Humans can accidentally ingest them by improper hand washing after doing yard work where a raccoon has defecated.

Once in the body, the parasite travels to the brain and causes neurological damage to the host. It can cause brain impairment, organ failure, and death. Symptoms may include lack of balance, loss of vision, nausea, tiredness, and decreased awareness of your surroundings. There is no known cure for a B. procyonis infection at this time.

An estimated 38 percent of Ontarian raccoons have B. procyonis. Be aware of raccoons that frequently visit your yard; they could be using it as a latrine. Raccoon removal services can keep your yard free of raccoon feces. Prevent your pets and family from being infected by ensuring your yard is raccoon-free.

Many urban wildlife species can carry rabies. There have been reported cases in raccoons, foxes, bats, and even domestic pets. 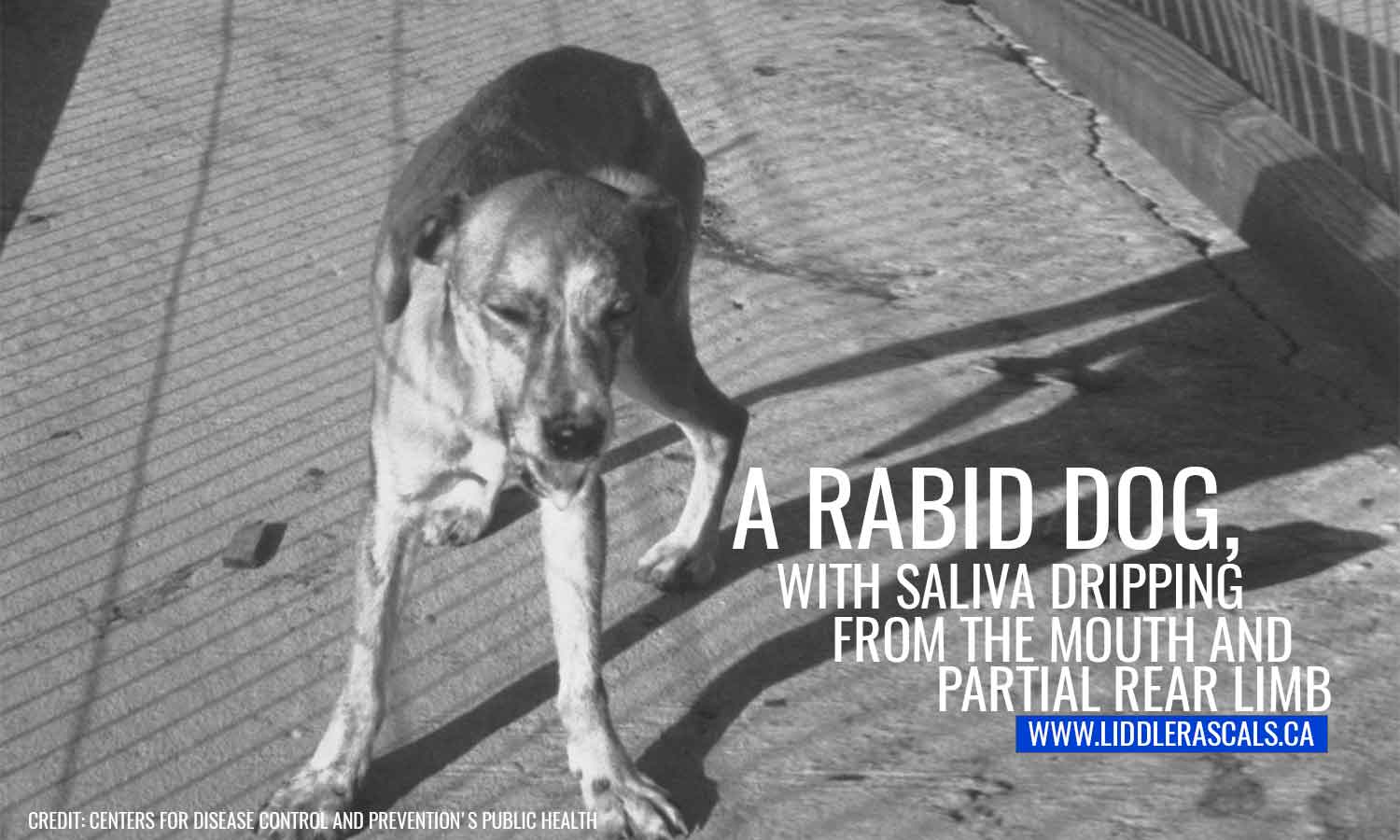 A raccoon with prodromal stage rabies will be acting oddly, but will not show the ‘typical’ signs of rabies. In the furious stage, the animal will be aggressive and agitated. It might gnaw on its limbs or attempt to bite any animal that gets close enough. It’s only in the ‘dumb’ or paralytic stage that we see the stereotypical signs of rabies: the shuffling gait (rear limb paralysis), the drooling or foaming at the mouth (facial and throat paralysis), confusion and agitation (inflammation of the brain, neurological damage). Most animals who contract rabies will die from respiratory arrest.

If you suspect that a wild animal in your neighbourhood has rabies, do not try to catch the animal yourself; call a wildlife removal service. Not only do they have specialized training to deal with this danger, they are vaccinated against the disease. 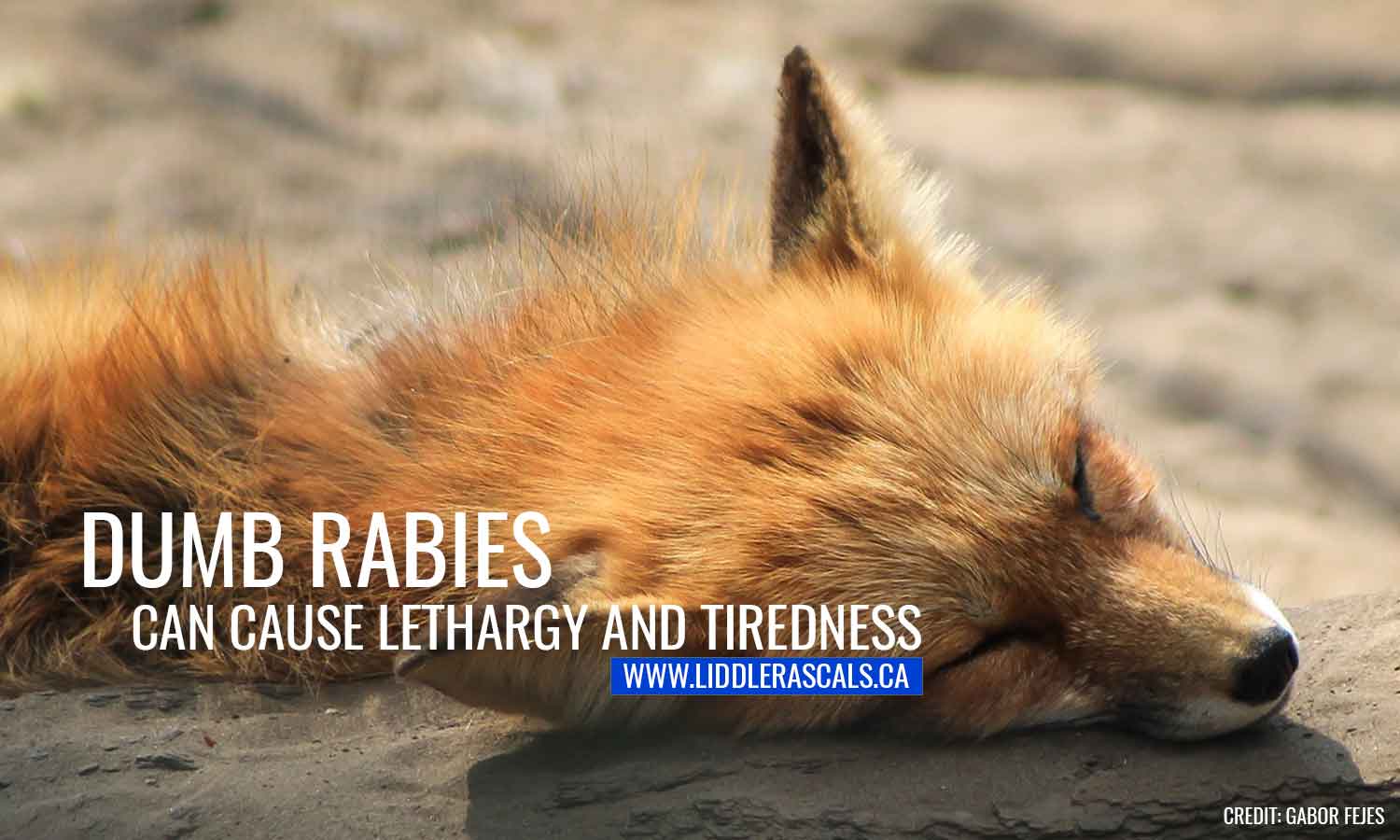 To combat the chances of getting rabies, have your pets vaccinated for the virus and teach your children to maintain their distance from wild animals. The human vaccine is typically a once-in-a-lifetime treatment, with over 97% of people who underwent the full course retaining immunity ten years afterwards. Dog vaccines are usually effective for three years; cats and horses will require annual booster courses. There is currently no effective vaccine for rabbits.

The Ontario government has recently started dropping anti-rabies vaccine packets, also known as bait packets, around Southwestern Ontario. This has significantly reduced the number of rabies cases reported. If you come across a bait packet while walking in nature, don’t touch it with your bare hands. Place a plastic bag over your hand and move the bait packet to somewhere less accessible to pets and humans. If your dog happens to ingest a bait packet, don’t worry. It may cause an upset stomach, but one packet is otherwise harmless to your dog. If they consume more than one, call your veterinarian. 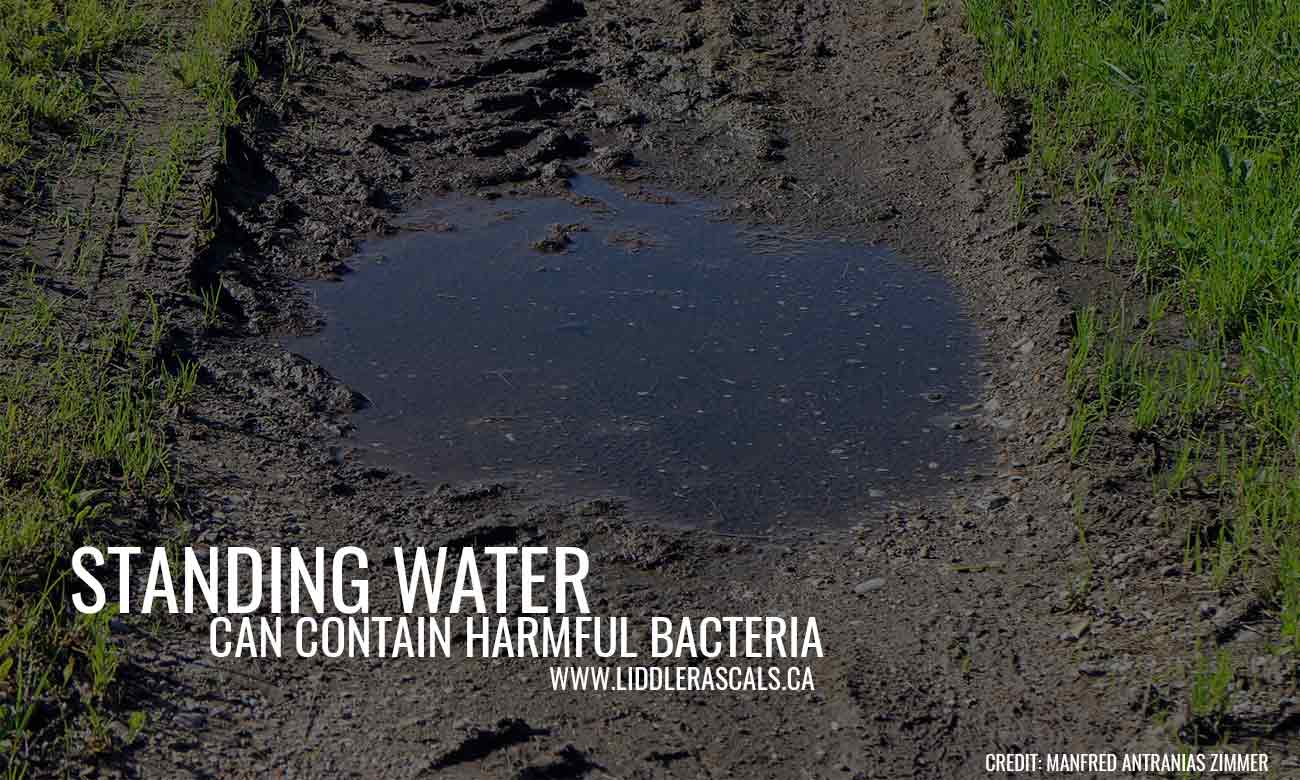 Leptospirosis is on the rise in Southwestern Ontario. It is a bacterial infection that comes from the urine and feces of infected rodents, farm animals, and dogs. Leptospirosis does not have to be ingested to spread; coming in physical contact with it through cuts in the skin or contacting the mucous membranes. Drinking water that contains the bacteria also allows it to spread.

Veterinarians have reported an increased number of dogs diagnosed with the infection. Symptoms of leptospirosis in dogs are tiredness, stiffness, vomiting, muscle pain, and fever. Vaccinations are available for pigs, dogs, cattle, sheep, and goats; consult your veterinarian if you are concerned about your pet’s possible exposure to this disease.

Humans can also contract leptospirosis. The symptoms in humans are different than in animals, however. The first phase entails fever, muscle aches, jaundice, red eyes, and abdominal pain. If left untreated, a second phase ensues which can include meningitis, liver failure, and kidney failure.

You can keep yourself and your pets safe by removing stagnant water sources from your property. On nature walks, prevent your dog from drinking from stagnant water. Consider getting your dog vaccinated after 12 weeks of age, then annually. In Toronto and other urban environments, leptospirosis is often spread through contact with infected rodent feces (from mice, rats, squirrels, and so on). Avoid letting your dog eat or walk through rodent excrement.

Have you ever seen a nocturnal animal stumbling around during the daytime? This is often a sign of Canine Distemper Virus (CDV) and occurs in dogs and other canids, skunks, raccoons, ferrets, and even pandas. It was long held that felines were immune to the disease, but it is now known to infect both house cats and larger wild cats. This is a common virus for Toronto raccoons and squirrels.

You may have heard of it by the name “hardpad disease.” The animal to appear drunk, off balance, and confused. They may wander aimlessly and approach humans without fear. They may show a green discharge from their eyes; they may have mild seizures. Like leptospirosis, CDV spreads through contact with contaminated water. Urine, feces, and water sources contaminated by urine or feces can spread the virus when contacted or ingested. 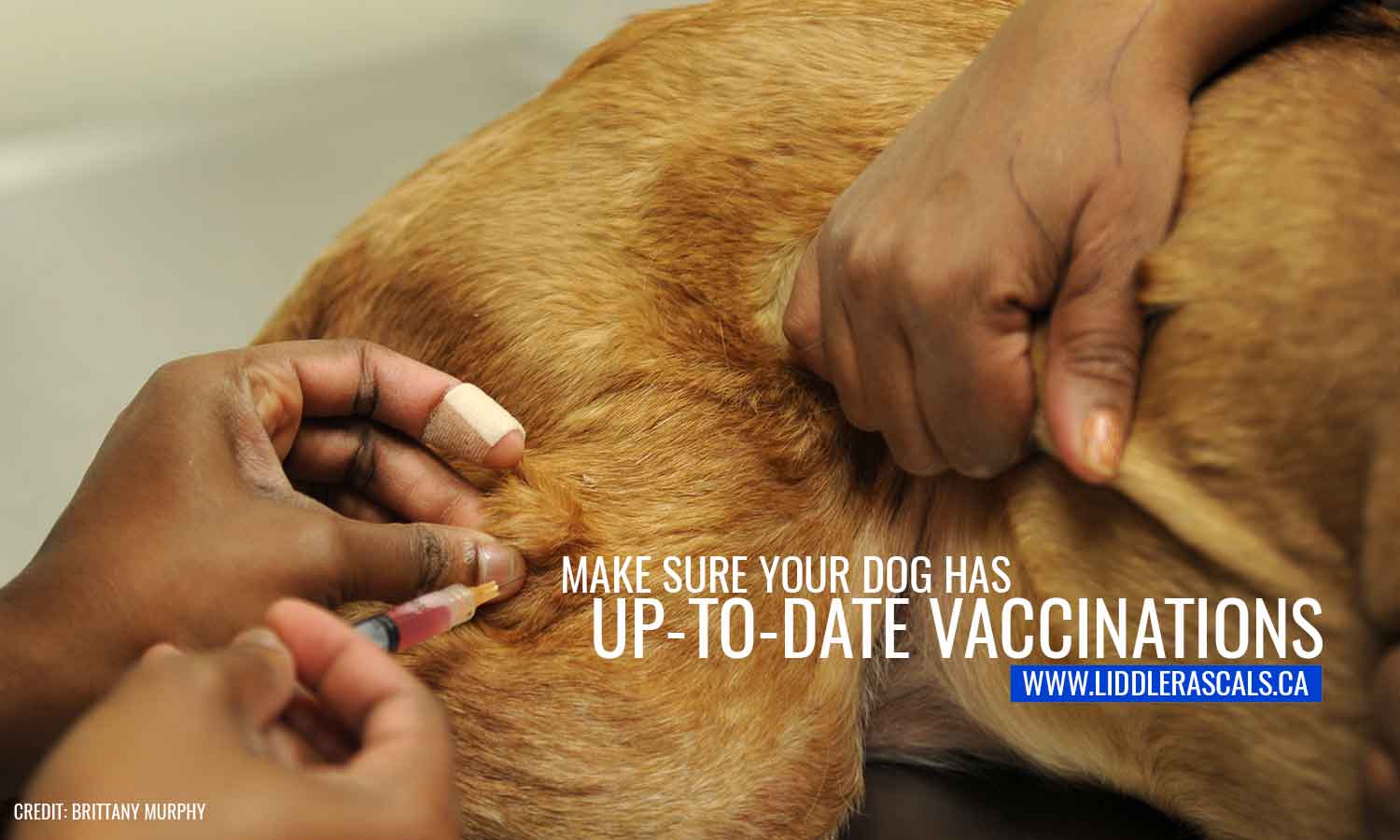 You can keep your pet safe by making sure they’re up to date on their vaccinations, and keeping them away from potential exposure. This is especially vital for ferret owners; unvaccinated ferrets have a mortality rate near 100% with this disease. Don’t allow your pet to interact with any animal you may suspect to be infected. Instead, call a wildlife removal service in Toronto to handle the animal. If the symptoms above are observed, this means the virus is already too far along to treat. Luckily, humans cannot contract CDV.

Bats are nocturnal creatures that hibernate in the winter. If you see one flying around during the daytime or hibernation months, they could be infected with White-Nose Syndrome (WNS). They’re usually emaciated and dehydrated; some fall to the ground and twitch erratically. The reason for the name of the syndrome is the white fungus that tends to grow on the bats’ faces and wings.

If you find a sick bat in your yard, do not touch it. Keep your pets and children away from it. More research is needed on this condition, and the cause is still unknown. At this point, it isn’t known to be harmful to humans. Call a reliable bat removal service to handle the sick bat.

Always maintain your distance from urban wildlife. Teach your children how to respect wild animals’ space and stay safe. If you do notice an animal behaving strangely, call a professional wildlife removal service in Toronto.

Liddle Rascals has 17 years of wildlife removal experience in Toronto. With expertise and perseverance, we remove sick raccoons, skunks, bats, and rodents from all types of properties. Our technicians are fully insured and use a humane approach when removing animals. If there are unwanted animals in your home or workplace, let us take care of it. Send us a message or call us today: (416) 356-5886.